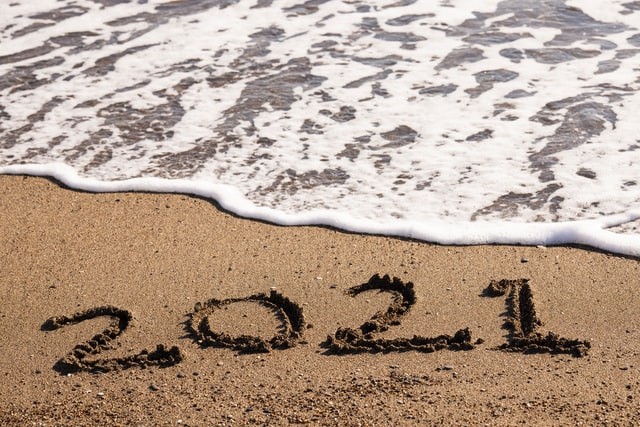 Since I'm currently sitting at home on my couch, resting after my 3rd Covid-19 vaccine shot with not a lot else to do, I thought I'd reflect a bit on the year I've had and give a bit of an outlook of what's ahead.

Not a lot has happened in the first five months of the year. I was getting more and more involved in open source, and I tried to blog regularly (about once every two or three weeks).

There were two reasons why I started my blog last year: Because I thought it would be fun to set up (narrator: it was not), and because I wanted to have a permanent resource I could link people to. I've also made it a rule that if I see a concept / question / (anti-)pattern at least 3 times, I would blog about it.

That was also the reason why I started my React Query related series of blog posts, which currently spans over 13 articles, as I have gotten a lot of questions around React Query.

2021 was definitely the year when I started to take open source seriously. I have contributed a little to open-source before, but the turning point came at around Mai 2021, when Tanner made me an official React Query maintainer. Around the same time, I also became a maintainer for remeda, my favorite TypeScript util library.

With those new responsibilities, it became clear that I couldn't just continue like before. I was already overworked, and to be honest, open-source was a lot more fun than work at that time. I had cancelled almost all of my vacations due to Covid-19 and didn't feel fully happy.

Being self-employed and catering to three different clients as a contractor, I made the decision to cancel one of my clients where I didn't feel my contributions were making much of a difference anymore, and introduced open-source-friday:

It might sound crazy to cancel a paid engagement to work for free on open-source instead, but it was definitely the right move for me. It gave me a bit of freedom to work on what I believe in, which can be much more fulfilling than a pay-check.

Tanner also convinced me to set up GitHub sponsors, where currently 18 amazing people are sponsoring my open source work 💖.

Oddly enough, being a React Query maintainer led to some amazing new consulting opportunities for me as well. I ❤️ React Query and React + TypeScript in general, and I also enjoy teaching, so I definitely feel very privileged that I got the opportunity to combine these aspects.

Later that summer, my blog even became a part of the official React Query docs. I'm very happy that people believe my content is good enough to be "official-docs" material, and it has kept me motivated to write more articles:

For the second half of the year, I kept an eye on React 18, the Working group, and how some changes would affect me as a user of React as well as a library maintainer. My probably biggest "contribution" in terms of impact in 2021 happened when I asked an innocent looking question to Dasishi Kato, author of the state manager zustand, on Twitter:

React 18 was about to ship a hook called useMutableSource, and it required input selectors to be referentially stable. I stumbled upon this when I reviewed a PR at work, where a co-worker of mine memoized all selectors to a zustand store with useCallback, something like:

Naturally, that got me thinking. Why would you memoize a selector that just returns a value from the state? That's not an expensive calculation, and useCallback is just a performance optimization 🤔.

The answer I got was surprising, as my co-worker said: The zustand docs recommend that!

I looked it up, and yes, it was really there:

It is generally recommended to memoize selectors with useCallback. This will prevent unnecessary computations each render. It also allows React to optimize performance in concurrent mode.

DaiShi's answer to my question why this was suggested was: Because it will be required in React 18 to avoid infinite loops in concurrent mode.

After that, the discussion escalated a bit, as the redux team around Mark Erkison as well as react maintainers like Brian Vaughn got pulled in as well. Eventually, the discussion moved towards the React 18 Working Group, which I was later also invited to, where the hook was renamed to useSyncExternalStore, and the api was adjusted so that selector stability was no longer required.

I'm glad my little tweet kicked off the discussion that led to this decision, which probably avoided massive breaking changes for many consumers. Just imagine having to memoize every inline selector in redux 😮. I do however regret the tone in which I voiced my concerns - I'm really sorry for that.

When react-redux released v8.0.0-alpha.0 in early October, I decided it's time to take a stab at making React Query ready for concurrent features, which will be shipped in React 18. Similar to redux, React Query has an external store that manages the cache, which components need to subscribe to. If we keep doing that with our current approach (basically, with useEffect and useState), applications might suffer from an issue called tearing, where parts of the ui might display outdated values.

If that concept is unfamiliar to you, there is a great talk from Dasishi Kato at React Conf 2021: React 18 for External Store Libraries about this topic.

To solve this issue, React 18 will ship with a new hook called useSyncExternalStore (yes, the one I mentioned above 😅), which libraries like React Query or redux need to adopt.

Right now, we have a draft PR that passes all tests against React 17 and React 18. Depending on when React 18 will become stable, we might include this PR in our next major release.

Speaking of React Query: at the end of October, we decided to work towards a new major version of the library, as some inconsistencies have piled up, and some issues couldn't be fixed unless we tackled them holistically with a new approach. We put our minds together and came up with a great new "Network Mode" feature to iron out these inconsistencies and to make React Query even better 🚀.

Version 4 is now in alpha, and we are looking forward to making a stable release sometime early next year. I will also very likely write a dedicated blog post about v4 in the near future.

At the end of the year, I got my first invitations to represent React Query at online Panel Discussions. As I've never done anything like that before, I was really, really nervous. Some people say this will get better over time, some say it doesn't 🤷‍♂️. Anyways, I don't like watching myself on those 🙈, but here are the links in case you missed it:

For my blog, I only have comparable metrics for the last 3 months, because I switched hosting provider and later analytics provider during the year. I am now with netlify and I'm using plausible.io for analytics, and I'm supper happy with both.

For that time period, I can see a steady stream of about 20k visitors and 35k page views per month, which is huge for my perspective, and definitely more than I would've ever thought would happen to my little blog.

I also tried to blog regularly - about once every two to three weeks. I've written a total of 21 articles, and November was the only month without a blog post (mainly because I was working on React Query v4 instead).

This year, I've grown my twitter friends by about 3500% 😮. Of course, that number becomes less impressive if you consider that I started the year with under 100 followers, as percentages are high when the bar is low. I'm still pretty proud of it though, as I seek to provide valuable content for the community. I try not to give random TypeScript tips that you can easily find by going to google, or explain how Array.map works in nice pictures. I think there are enough people on Twitter doing that already. Also, I'm really not in it for the followers. I think there is a sweet spot for Twitter that is right between where you feel like you're shouting into the void (< 1k) vs. where your notifications are becoming unbearable (apparently > 10k, but I can't tell yet). I'm right in there, and it feels perfect at the moment 😊.

The tweet that got the most impressions this year (74k) was one I've quickly written on my phone after answering a certain question for the Nth time - which also lead to me writing React Query as a State Manager - arguably one of my best received articles:

I'm quite excited for what lies ahead. With React 18 and React Query v4 around the corner, the ecosystem just keeps getting better and better, which is to everyone's advantage.

For 2022, I really want to rewrite my blog, and go away from gatsby towards either next.js or remix.run - or whichever framework will be all the rage next year. I don't want to do this because I'm unsatisfied with gatsby (I'm not), but more so for the technical challenge and to keep up-to-date with the latest developments on how to build stuff.

So let me know in the comments below ⬇️ (or reach out to me on twitter) what you think I should be choosing and why. I really hope I find the time to get around to it 😀.

With that, all that is left for me to say is merry Christmas 🎄 (if you are celebrating it), a happy new year 🎊, and I hope you say safe and healthy ⛑. I will be taking about two weeks time off to hopefully come back refreshed next year.